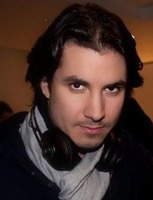 Jérémy Ferrari is a French comedian and radio/television presenter. He is known for his black comedy. In his comedic sketches, he deals with racism, xenophobia, misogyny, and other forms... Wikipedia